California to consider a state-wide ban on hotel toiletries 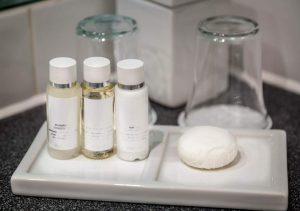 California could ban mini hotel toiletries so taking mini toiletries from a hotel could soon be a thing of the past.

In an effort to reduce the use of plastics and plastic waste the members of the California State Assembly voted in favour of the Assembly Bill 1162 by six to three.

While the bill passed on Monday might bring an end to complimentary mini bottles of shampoo, conditioner, shower gel and moisturizer.

‘ Lodging establishments’ would be banned by the bill that will include hotels, motels, resorts, bed and breakfasts and holiday apartments that will offer small plastic bottles that hold 340ml or under of product in rooms or public spaces.

Instead of individual toiletries ‘bulk dispensers could be offered by the establishments.

Assembly Member Ask Kalra said that the amount of plastic produced was increasing exponentially, and they must consider all options to reduce this pollution from entering our waste streams.

On an individual level  it might not appear to be a problem, small plastic bottles that are less than 12 ounces represent a sizeable amount of waste collectively that the state must address.

It will be decided by California Governor Gavin Newsom  whether to sign the bill into law, allow the bill to pass without his signature or veto the motion.

Hefty fines of up to $2,000  would be imposed for those who contravene the rules more than once if it becomes law.

Marriott had already announced plans of swapping mini bottles for bulk dispeners in 450 of its hotels.