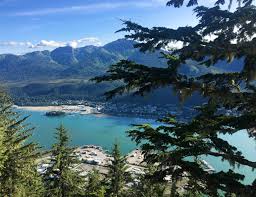 The capital city of Alaska, Juneau is expecting about 1.3 million visitors as the cruise tourism here is on rise. Juneau is a unified municipality city under the Government of Alaska. The cruise tourism in Juneau is getting its underway for this the tourism officials expect this huge number of tourists. The tourism year for Juneau in 2019 began with the arrival of Ruby Princess on Sunday.

According to Princess Cruises director of shoreline operations Kirby Day, the cruise carries up to 3,300 guests who will hit the Juneau streets shortly after their 9 a.m. downtown arrival. The tour operators, restaurants and shops spent most of the week preparing for the first wave of visitors that will increase throughout the summer.

As many as five ships will eventually pull into port on a given day. Liz Perry, chief executive for Travel Juneau, the city’s marketing arm for visitors said that the cruise industry ramps up over the season and we will see more and more of our seasonal shops open. There will be more food trucks available and that ramps up pretty quickly because the season over the last several years has ramped up very quickly.

In the year 2018, around 1.1 million people arrived in Juneau off cruise ships, according to John Binkley, president of the Cruise Lines International Association Alaska. The cruise ship visitors have been on a steady climb since 2015, according to a February report prepared by the McDowell Group for the state’s economic development agency.

According to the report, In 2016, Alaska welcomed its one millionth cruise visitor for the first time in seven years, and it’s climbed slightly ever since.

Perry says another 80,000 traveling by ferry, or plan to, visited the capital city last year. She also said that the cruise industry has done a terrific job of the marketing of the Alaska and it has such a mystique in everyone’s mind as they start planning their trips. And this is true of the cruise industry and of independent travellers.

The Ruby Princess kicked off the season last year and will make 20 visits to Juneau before the season ends early October, Kirby Day said. Day also said that this year in Alaska is an exciting anyway. The tourists can get five minutes of daylight every day. The tourism officials in Alaska say the projected growth is a combination of larger ships replacing slightly smaller vessels, plus new or returning entries to the market.