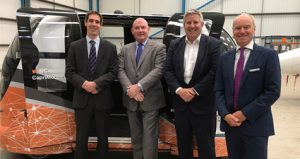 Bristol Airport hosted a Capri autonomous pod as part of its Autonomous Vehicle Breakfast Meeting today, giving key stakeholders an opportunity to better understand the future of connected and autonomous vehicles at airports.

The event began with an introduction from Dave Lees, CEO of Bristol Airport, who started the session by highlighting the opportunities that flying creates for millions by connecting people in an international world and giving people freedom. Balanced alongside this however the Airport also has a key responsibility in ensuring that this is achieved in a responsible manner including moving quicker towards a lower carbon future.

This was followed by a summary of the overall Capri project by George Lunt (AECOM), project manager of Capri. He emphasised the role of airports as a prime “early adopter” for the roll-out of connected and autonomous vehicles in the public domain.

The presentations closed with a closer look at the technical aspects of the pod by Julian Turner, CEO of Westfield Technology Group, who are responsible for the build of the pods and development of the Autonomous Control System. A brief introduction to new battery technology being trialled within the pod was given and other environments in which the pods have been deployed were summarised. The challenges faced so far in public pod operations were highlighted, with emphasis on the impact an unfamiliar pod has on pedestrian and cyclist behaviour.

Capri has been working with Bristol Airport over the past six months to develop a business case for autonomous pods on its site. A phased approach that will progress with improvements in the technical capability of autonomous vehicles is being considered. This work has included passenger engagement and questionnaires, led and developed by the University of West England.

The pod’s first public appearance will take place in later this year at the Queen Elizabeth Olympic Park, a diverse estate that includes retail, recreation, residential and business centres. This will be shortly followed by a trial around The Mall at South Gloucestershire’s Cribbs Causeway retail park. The project will culminate in an on-road public trial at London’s Queen Elizabeth Olympic Park in 2020.

Focusing on trips of up to five miles to connect people to places, Capri is developing the next generation of autonomous pods, as well as the systems and technologies that will allow the vehicles to navigate safely and seamlessly in both pedestrian and on-road environments, known as ‘dual-mode’. The consortium is looking at how the network can harness data to enable location, positioning and on-demand services to help support a wider rollout of dual-mode autonomous pods.

George Lunt, Technical Director, AECOM, said: “Connected and autonomous vehicles are predicted to make a huge impact on society, but require significant research and development to support their future commercial use. With a wide range of potential markets for on-demand mobility services, our project has clear economic benefits that will inform the business cases for these types of schemes. Our work with Bristol Airport is an important stage of the project as we look in detail at the underlying operating models required to deliver a viable service.”

The Capri consortium consists of a team of experts including global enterprises with established multidisciplinary expertise, academic institutions at the cutting-edge of automotive research, and SMEs developing exciting new technology solutions. A large number of consortium partners are based in the West of England, putting the region at the forefront of this rapidly developing sector.

Capri is an AECOM-led consortium that was awarded funding from Innovate UK and the Centre for Connected & Autonomous Vehicles (CCAV). It was awarded the funding as part of a competition to invest £35 million in industry-led research and development projects on CAVs. The aim of the competition was to find projects that would deliver technical solutions for CAVs that provide real-world benefits to users and where the commercial benefit is clear.