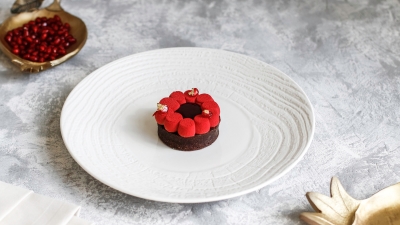 One of the symbols of Azerbaijan, the pomegranate has been cultivated, enjoyed and celebrated in the region since ancient times. The city of Goychay is known as the “Pomegranate Paradise,” and each November the harvest is marked by the Pomegranate Festival. The city welcomes numerous guests from all over the country and proudly calls this festival one of the most interesting, colourful and joyful events of the season not only for Goychay but all of Azerbaijan.

Even though it is located in the capital, Four Seasons Hotel Baku also celebrates the festival. Executive Sous Chef of Zafferano Restaurant Luca Casini created an exclusive three course menu for AZN 80 (around USD 48) per person, available for guests through November 10, 2019.

All three dishes in the menu are completely different but with one common feature: the main ingredient is pomegranate or “The King of Fruits,” as Azerbaijani people call it. With compliments, the Hotel offers a glass of wine to every guest who orders the Pomegranate Menu.

Inspired by the Festival, Bentley’s Whiskey Bar’s Mixologist Samir created a special Pomegranate Cocktail that guests can enjoy during the month of November 2019.

Apart from the above, the Chefs of the Hotel along with catering team also created an exclusive pomegranate themed coffee break for private events available throughout November 2019.

Meanwhile, the room service team is ready to place pomegranate amenities in guest rooms along with a small note that briefly describes the story behind the Festival.

Reserve a table, private meeting room or a stay to dive into the best of Azerbaijani traditions and hospitality with Four Seasons Hotel Baku.