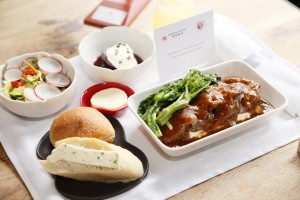 Hong Kong Airlines has announced a new culinary collaboration with San Francisco-based celebrity chef and television personality Chris Cosentino, before its inaugural flight to San Francisco. Chef Cosentino is known for his San Francisco restaurant, Cockscomb, where he reinterprets classic San Francisco dishes by adding his own unique twist. He is also known as the winner of Top Chef Masters, a contestant on The Next Iron Chef and his appearance on Iron Chef America in addition to his extensive work raising awareness and funds for Chefs Cycle for No Kid Hungry, a national charity fighting to end childhood hunger.

“I’m thrilled to be collaborating with Hong Kong Airlines on this exciting project. There are so many similarities between what I do at Cockscomb every day and what they do in the air so there was a natural synergy from the beginning. I’m really looking forward to being a part of another group that puts their guests first and truly values hospitality above all else.

I’ve been mesmerized with Hong Kong for years and am excited that more people will get to explore its vibrant culture and rich culinary history via this new route.”

Hong Kong Airlines is bringing Chef Cosentino’s flair for innovative cuisine onboard its flights out of San Francisco, and will offer a new Business Class inflight menu consisting of delectable dishes – described by the chef as “big in flavor, rich in texture”. Chef Cosentino has designed a comprehensive menu of 12 dishes, consisting of a series of appetizers, main courses and desserts that will be rotated regularly. Highlights include charred avocado with rock shrimp remoulade and red sorrel; braised beef short rib in Burgundy demi sauce with white bean puree and pickled pepper garlic broccolini; and ginger dates and toffee cake, topped with whipped cream and dried sugar dates. Chef Cosentino’s new menu will also be expanded to flights out of Los Angeles later in the year.

Chris Cosentino is the latest culinary talent to partner with Hong Kong Airlines, following the likes of other eye-catching names such as Hoi King Heen restaurant at the Intercontinental Grand Stanford Hong Kong; Dynasty Seafood Restaurant in Vancouver; Blue Elephant in Bangkok and most recently, Hong Kong chef Gabriel Choy.

Hong Kong Airlines will launch its new four-time weekly service between San Francisco and Hong Kong on Sunday, 25 March 2018. The City by the Bay will become the airline’s third destination in North America, following the successful launch of services to Vancouver and Los Angeles in 2017. Hong Kong Airlines has added more than 10 new destinations to its fast-growing network since its 10th anniversary in 2016. It will take delivery of 21 Airbus A350s by 2020.