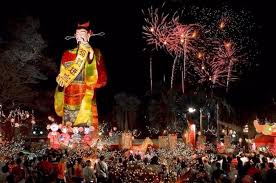 According to China UMS, more than 6.6 billion yuan (around 980 million U.S. dollars) was spent by tourists to Shanghai during the week-long holiday ending Sunday, accounting for 37.3 percent of the total consumption in the city.

There are over 40 percent of tourism spendings were made by tourists from neighboring Jiangsu and Zhejiang provinces. During the Spring festival holiday, outbound tourists from Shanghai spent more than 11.1 billion yuan on domestic travel, heading to places such as Suzhou, Hangzhou and Nanjing, according to China UMS.

Meanwhile, a report jointly released by the China Tourism Academy and China UMS showed that traveling during the Spring Festival holiday has become a new custom. The per capita tourism consumption in Shanghai during the holiday ranked first in the country.

According to a sampling survey of 380 retail and catering enterprises conducted by the Shanghai Municipal Commission of Commerce, their sales rose 8.1 percent year on year during the holiday, signifying robust consumption. The Spring Festival, Chinese Lunar New Year, is traditionally a time for family gatherings in China.

While on the contrary, the entertainment parks in Beijing receive 2.3 million visitors during Spring Festival holiday.

The parks have become popular destinations for people in Beijing to celebrate the week-long Spring Festival holiday, which ended on Sunday.

Beijing’s 11 municipal parks and the Museum of Chinese Gardens and Landscape Architecture received 2.32 million visitors during the holiday, a slight increase over the previous year, according to the municipal park administration. The peak occurred between Thursday and Sunday, with around 400,000 daily visitors. The Summer Palace, Tiantan (Temple of Heaven) Park, and Beijing Zoo were reported as the most popular destinations.

A twine of events and activities, such as temple fairs, winter sports and flower exhibitions, were held across Beijing during the holiday.