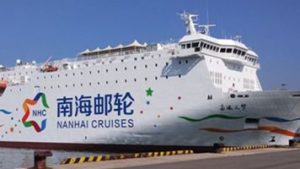 According to research by the China Cruise and Yacht Industry Association and the China Ports Organization, the 13 ports saw 969 cruises and 4.9 million visits, falling 17.95 percent and 0.98 percent, respectively, from 2017. It is the first slump since cruise tourism emerged in China in 2006, the research showed. Major ports in Shanghai and Tianjin were hit by significant downturns.

The decline was steeper at the cruise port in Tianjin, with oceangoing cruises declining 33.7 percent and visits dropping by 27.4 percent compared with 2017, the research said. Qi Xin, president of Wuhan Chunqiu International Travel Service, based in Hubei province, said their numbers for cruises and travelers declined sharply in 2018.

He said that the slowdown first appeared in June. Then the slump can mostly attributed to low levels of spending by Chinese travelers, especially seniors who look for cheaper tickets but are unwilling to spend money on the vessel.

No more than 5 percent of travellers, as far as I know, spend money for onboard entertainment.

Qi said cruise companies typically attract travelers with low-priced tickets, and then try to balance costs by encouraging travelers to enjoy entertainment events on the cruise. For example, the cost of a five-day cruise to Japan dropped to 1,500 yuan ($222) last year from 4,000 yuan.

“The cruise owners have reduced trips to China since both ticket and onboard consumption failed to subsidize their costs,” Qi said. “We are in a dilemma because foreign-run cruises are retreating from China due to meager profits” while China does not yet have large numbers of oceangoing cruise ships.

“Cruise tourism is still in its infancy in China, so the related travel offerings are rather lower in price. Besides, cruises departing from China usually head to neighboring countries like Japan, where the ports are not that suitable for cruises to dock because of inadequate facilities,” said Zhang Gaowei, Lvmama’s director of cruise tourism.