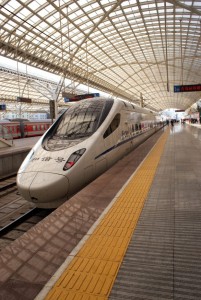 Lu Dongfu, general manager of China Railway Corporation said that the country’s operating high-speed rail tracks accounts for 66.3 percent of the world’s total by the end of 2017.

The operator aims to build around 4,000 km of new rail lines this year while 3,500 km of which will be high-speed rail tracks.

3.04 billion passenger trips were made on railways in 2017 which was up by 9.6 percent year on year.

It was reported that more than 56 percent of those trips were made on high-speed railways.

70 percent of rail tickets were sold online and more than 70 percent of freight business were transacted online.

It has been entirely designed and manufactured in China, the Fuxing is more spacious and energy-efficient, with a longer service life .