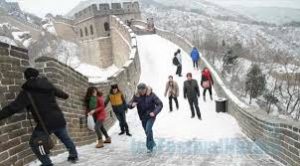 Chinese travelers made about 197 million visits for winter activities in the period 2017-2018, recording a year-on-year increase of 16 percent, as per a new report.

During the winter, tourism generated revenue of about 330 billion yuan or 47.9 billion U.S. dollars according to a report released by the Data Center of the Ministry of Culture and Tourism on Sunday. It was a 22 percent year on year.

Ever since Beijing won its bid to host the 2022 Winter Olympic Games in 2015, winter tourism in China has been booming.