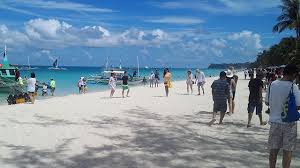 Boracay Island has preserved its name and fame as a major tourist spot in the country for Chinese and Korean tourists, in spite of the challenges imposed by its provisional closure and ongoing rehabilitation.

Statistics from the Department of Tourism in Boracay showed the two well-known tourist market sources estimated for 80% of 216,766 foreigners visiting the island for the initial two months of 2019.

The domestic tourism market witnessed 110,406 arrivals, 13,147 of whom were overseas Filipino workers.

For the first two months, total tourist arrivals totaled 340,309 in comparison to 375,993 in 2018. The “decline” of tourist arrivals was impacted by Boracay’s close down and the maximum number of visitors allowed on the island in view of the carrying capacity of Boracay.

During the January-February period, China was the biggest market with more than 107,164 or 49% of the total foreign visitors in 2019. This was followed by Korea with 68,453 or 31% of inbound tourists.

For the period, Americans were the third largest market with around 5,502 or 3% of total travelers.

Tourists from East Asia – particularly China, Japan, Hong Kong, South Korea and Taiwan – had the biggest market shares of all visitors with 179,835 arrivals or 82% of total foreigners.