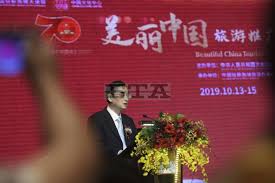 Organised by China’s Ministry of Culture and Tourism and hosted by the China National Tourist Office in Singapore, the event was attended by some 250 representatives from government offices, travel agencies and airlines.

In the meantime, 978,000 Singaporean tourists visited China in 2018, recording a yearly climb of four per cent, Xiao said, adding that Singapore ranks the tenth country in the number of inbound tourists to China.

Que said in his speech that this event stands to be one of the largest Chinese tourist promotions in recent years in Singapore, which will not only help attract more Singaporeans to visit China, but will also enhance the mutual understandings between the two peoples.

Chen Feng, a college student from the National University of Singapore, shared during the event her impression of China after her recent tours there. According to Chen, China is a combination of old and young. Being a country with a long-history, China also witnesses the emergence of nationwide cashless payment and outstanding academic achievements of the Chinese universities.

During the event, winners of “China-All Around You,” a micro-video competition showcasing China, were also awarded.

Singapore is the first stop of this Chinese tourism promotion, which will also travel to Thailand and the United Arab Emirates.