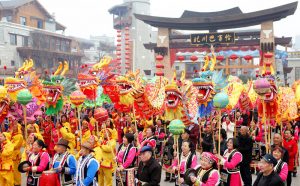 February’s Chinese Spring Festival travel rush is originating from a long-held tradition for Chinese people to reunite with their families during the Chinese New Year, has now embraced numerous international elements.

In addition to homebound trips, imported gifts and overseas holidays have helped redefine the travel rush, sending festive vibes across the globe.

Many foreigners working or living in China also join in the largest annual human migration on the Earth.  Macao has over 60,000 migrant employees from Southeast Asian countries, a large portion of whom will choose to go home during the Spring Festival holiday.  In order to handle the rising traffic pressure, airlines from Macao International Airport will add 200 extra and charter flights.

There are long distances and crowded journeys will not stop returnees from bringing their loved ones all kinds of festival gifts, among which imported products are common.

Zhang Lu, a girl from central China’s Chongqing Municipality, bought her father an imported healthcare product, which was sold for the first time on China’s e-commerce platforms after the first China International Import Expo held in Shanghai last year.

In Sydney, Australia, there are many sales promotions for the Chinese New Year in shopping malls. Many of the goods were flown to China in the suitcases of the returnees. Chinese Spring Festival is a time for family reunion, which does not necessarily mean staying at home.

There are millions of Chinese travel with their families during a period of some 15 days before the Lunar New Year’s Day on February 5 this year and around 40 days thereafter, offering the global travel market tremendous opportunities.

In order to attract more Chinese tourists, Commercial Bank of Ceylon PLC, one of Sri Lanka’s leading private banks, announced early January that Chinese tourists visiting the island country could pay for their goods and services through the WeChat Pay, a popular payment platform in China. Dozens of Chinese New Year celebrations, including concerts, night galas, parades, among others, are being held across New York City to welcome a flood of Chinese tourists.

In Manhattan, a window display featuring the Chinese zodiac sign of pig designed by China Arts and Entertainment Group for the Year of the Pig has been installed in the landmark Empire State Building’s lobby windows on the Fifth Avenue. Spectacular fireworks are expected to light up the night sky on Feb. 11 over the Hudson River in celebration of the Chinese Lunar New Year and honoring the 40th anniversary of China-U.S. diplomatic relations.