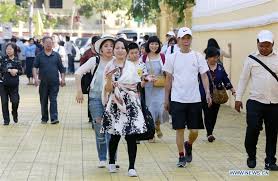 As the world’s most travelled nation, China is taking giant strides in global tourism. As the millennium started with 10 million trips being taken by Chinese outside the mainland, last year the figure was around 150 million, including visitors bound for Hong Kong, Taiwan, and Macau. This is the largest number for any country in history.

China’s overseas tourism market still has huge potential – even if in early October, fewer Chinese visited abroad during their Golden Week in favour of domestic destinations.
However, this growing Chinese appetite for overseas trips is not only the result of increasing disposable income.

The simplification of international travel, the relaxation of visa requirements by many countries, affordable air fares, and the ease of moving around in the digital era, have cut down both the economic, administrative, and mental hurdles that made overseas travel a pursuit for just a privileged few.

“Globalization is leading to the removal of barriers for tourism,” said Altai Kulginov, the Mayor of Nur-Sultan, Kazakhstan’s capital, during the 8th UNWTO Summit on Urban Tourism.

Nevertheless, in spite of this apparent shrinking of geography, Chinese visitors still prefer closer and culturally more familiar destinations when traveling overseas, with warm Southeast Asia featuring among the top 10 spots for the most visited countries by the Chinese.

Chinese travelers are not only big in numbers, but also in terms of spending while traveling. According to the UNWTO, last year, Chinese passport-holders made up for one fifth of all international tourism spending – a mind-blowing US$277 billion.