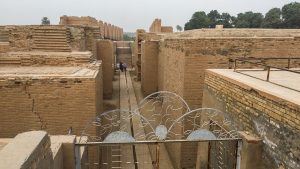 The ancient city of Babylon, was designated a UNESCO World Heritage Site on Friday. First referenced in a clay tablet from the 23rd century BC, it won a place in the list of UNESCO after a vote that followed decades of lobbying by Iraq. Iraqi President Barham Salih said the city, now an archaeological ruin, was returned to its “rightful place” in history after years of neglect by previous leaders.

Prime Minister Adel Abdul Mahdi said, “Mesopotamia is truly the pillar of humanity’s memory and the cradle of civilization in recorded history”.

The government will allocate funds to maintain and boost conservation efforts. Babylon, about 85 km (55 mi) south of Baghdad, was once the centre of a sprawling empire, renowned for its towers and mudbrick temples. Its hanging gardens were one of the seven ancient wonders of the world, commissioned by King Nebuchadnezzar II.

Activists and residents flocked to the replica Ishtar gate at the site’s entrance to celebrate what they called a historic moment.

City Of Babylon has not been dedicated as one “in danger” after objections from the Iraqi delegation. Iraq is replete with thousands of archaeological sites, many of which were heavily damaged or pillaged by Islamic State during its barbaric three-year-rule which ended in 2017. The other five World Heritage Sites are the southern marshlands, Hatra, Samarra, Ashur and the citadel in Erbil, the capital of Iraq’s Kurdistan Region.