City of Niagara Falls will get new hotel to boost tourism 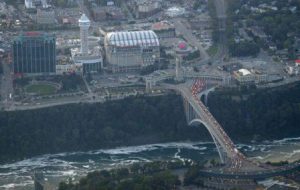 A slate of projects in the City of Niagara Falls were approved for taxation breaks and one new hotel in the Town of Pendleton moved closer to obtaining one after a meeting of the Niagara County industrial Development Agency on Wednesday.

Omkara Hotel, a company formed by hotelier Ramesh Patel has received preliminary approval for his proposed 43,000-square-foot Holiday Inn Express Hotel, to be located at 6900 S. Transit Road in Pendleton. The hotel is slated to be four stories tall with 77 guest rooms.

Patel, who has built several other hotel properties with the help of IDA tax breaks in the Falls and Pendleton, has asked the board to grant the company a $1.7 million tax abatement package over the next 10 years.  A final approval vote for the $5.6 million is expected to take place next month.

“In either March or April, depending on how it goes,” said Stephen Brady, chairman of the IDA board. In addition on Wednesday, the IDA board gave final approvals to a series of projects in Falls, including a pair of projects overseen by the same family, the Patels, which includes husband and wife pair, B.F. and Pragna Patel, and their son, Nirel Patel. The family is planning to invest $3 million at the historic Niagara Club, 24 Buffalo Ave., for which the company would receive $383,424 tax reductions over the next decade.

Patel, the vice president of the Rupal Corp., which among other tasks manages the family’s properties, including the Courtyard by Marriott on Buffalo Avenue, said the project will involve the phased installation of a restaurant, banquet facility, cafe, rooftop bar and an amusement attraction. Under Rupal Corp., the family also plans to undertake a $4.2 million renovation of its independent economy lodging, 200 Rainbow Blvd., which will transform it into a “boutique upscale accommodation” that features a multi-use venue for live events and an indoor-outdoor bar.

The board also granted an abatement package to the company redeveloping a series of Third Street properties that were obtained by the Falls government through the U.S. Attorney’s Office in the plea agreement of Pravin Mehta, known otherwise as “Dr. Feel Good.”

Penn Terra USRE Corp. plans to spend $5.6 million on the Third Street land formerly owned by Mehta and is asking for $1.12 million in tax abatements over the next 15 years. Company officials say they will build 36 apartment units, to be inhabited by students for eight months and guests for the remainder of the year.