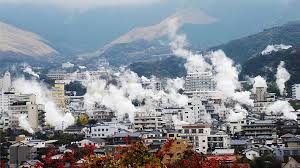 The city of Beppu in western Japan is popular for its hot springs. Hotels and resorts here compete with each other for attracting tourists to renowned sights like the “Hells of Beppu,” a series of colored and super-hot natural pools.

The numbers of Japanese tourists visiting the resorts plateaus, local and international hotel chains are expanding to meet this boom in foreign tourists.

Tourist numbers went down in 2016 after an earthquake in nearby Kumamoto, but the numbers saw a record in 2017. South Koreans have driven the 130 percent increase in foreigners staying in Beppu over the past five years.

The impact of tourism in Beppu can be clearly seen by the investment in hotels.

InterContinental Hotels Group is one of the businesses looking to take advantage of this. The Group’s joint venture with All Nippon Airways will open a new 89-room luxury hotel next year.

“Beppu is one of the world’s most famous hot springs resorts, but it didn’t have a luxury hotel of international fame,” said Hans Heijligers, the CEO of ING ANA Hotels Group Japan. “The wealthy Japanese market is very attractive, and inbound tourism is also booming.”

With five matches for next year’s Rugby World Cup being played in neighboring Oita City, extra rooms might be needed.