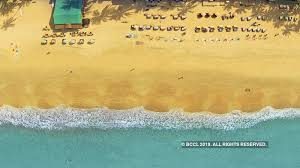 Three years after the Union ministry of tourism sanctioned about Rs 96 crore under the Swadesh Darshan programme to take up coastal tourism projects in three districts of the state of Karnataka, the state government has decided to return the funds it received as the government failed to implement the projects within the stipulated time.

“In 2015-16, the Centre sanctioned Rs 95 crore for the integrated development of coastal tourism circuits in Dakshina Kannada, Uttara Kannada and Udupi districts. The government even released Rs 19 crore to start the work. But there was no progress. We have now decided to return the sanctioned amount and submit a new detailed project report in two months and get it sanctioned,” tourism minister CT Ravi said.

Under Swadesh Darshan scheme, 15 circuits are being developed across the country, which include coastal circuit, eco circuit, heritage circuit and rural circuit. About 12 states with a coastline have been identified for developing the coastal circuit. While most of the states and the Union territories including neighbouring Kerala, Goa, Maharashtra, Tamil Nadu and Andhra Pradesh have been sanctioned several thousand crores under the project and are making progress, Karnataka is the only state which has lagged behind with hardly any work on the ground.

Karnataka government had prepared a detailed project report three years ago and submitted it to the Centre. “Two years later, the state government realised that the DPR was unrealistic and was not implementable. Last year, we approached the Centre with a submission that we will revise the DPR. But officials in the tourism ministry rejected our plea as they thought we were too late to even submit a revised DPR,” a senior official in the tourism department said.

Meanwhile, the Centre has asked the state to submit a utilisation certificate for the work done for Rs. 19 crore released. But having not done any work on the ground, the state could not submit the UC either. Left with no option, after the new government came to power in the state, the department has decided to return the funds and submit a fresh DPR under the new scheme.