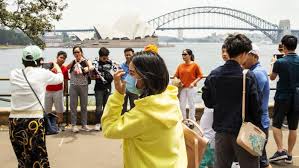 According to analysts from Commonwealth Bank and ANZ, the aftermath of coronavirus on Chinese factories and tourism might result in a significant impact on Australian retailers and the broader economy.

Chinese tourists and international students spend more at Australian retailers than other nationalities, meaning that the government’s ongoing travel ban will also damage the retail sector.

Australia’s shipping routes have not been particularly affected by the government’s travel restrictions, according to the CEO of Ports Australia, Mike Gallacher.

He said both maritime imports and exports were continuing as usual.

The government’s travel ban, announced on February 1, requires any person who passes through mainland China to spend at least 14 days outside of China before entering Australia. But many cargo ships from China to Australia already take 13 or 14 days to arrive, creating only slight delays.

The chief executive of JB Hi-Fi, Richard Murray, sales had not been impacted yet by the outbreak. JB Hi-Fi recorded a 9% rise in its half-year profit this week, and a 4% rise in sales.

“From a store’s perspective we haven’t seen any impact,” he said. “Across the board the sales numbers certainly don’t show it.”

Murray said supply issues were a possibility but “we’ll start to get a better sense of suppliers in four to six weeks”.

Earlier this month, the governor of the Reserve Bank, Philip Lowe, said the economic impact of the new coronavirus would be worse than Sars.

The RBA has also previously predicted that the drought and bushfire crisis would slow growth by 0.45 percentage points this year.

The main impact of the coronavirus would be on tourism and education.

In addition, roughly 100,000 Chinese nationals with valid student visas are currently outside of Australia and cannot enter the country until the government’s travel ban is lifted.