As Coronavirus spreads tube passengers decline by 20 per cent 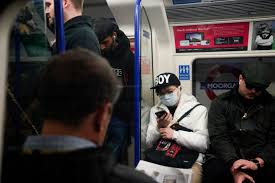 Underground travel is down almost 20 per cent from the same period last year – with bus journeys falling by 10 per cent.

There are now more than 400 confirmed cases of coronavirus in the capital.

And TfL says Tube and bus use has been falling since the start of the month, as public awareness of Covid-19 began to grow.

The transport authority says fewer people are making journeys, and those who are travelling are taking fewer trips.

There are fewer visitors to the capital, with fewer incoming trips from London’s airports.

Home-working and anxiety about catching the virus on public transport are also contributing to falling passenger numbers, the network believes.

Fewer people have been using TfL services since October last year, due to economic uncertainty – and a series of storms in February also dented revenue.

And despite slashing its £1.5 billion deficit, TfL still has a £200 million shortfall.

Based on Government modelling, it is now predicting half a billion pounds in lost fares from coronavirus

The transport authority has cash reserves to cover losses until at least the end of the year.