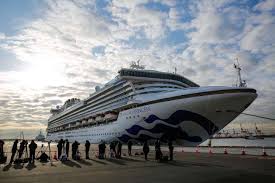 Around 3,800 passengers disembarked from a cruise ship in Miami Sunday unscreened for coronavirus, even though a previous passenger had tested positive, news reports said. Many of those passengers went directly to Miami International Airport to head home.

The former passenger departed from the MSC Meraviglia in Miami on March 8 after taking a Caribbean cruise, leaving behind the crew and 103 passengers for the next voyage, according to the Herald. The ship then picked up thousands of additional passengers.

On March 12, Canada’s Public Health Agency informed the cruise line that the passenger had tested positive for COVID-19, the newspaper reported.

After officials received the notice from Canada, MSC Cruises placed seven crew members in isolation; however, everyone else was allowed to leave the ship in Miami. Officials told the Herald that none of the passengers were exhibiting any symptoms.

Failing to screen could have dire consequences. The first person to die of coronavirus in California was a passenger on the Grand Princess cruise ship where guests and crew members tested positive for the disease on a subsequent voyage.

In contrast to what happened in Miami, the Grand Princess was ordered to remain off the coast of California until screening protocols were established. Once the ship docked in Oakland last week, all passengers were screened in a fenced-off section of the port. American passengers were then quarantined at U.S. military bases while foreign guests and crew members were transported to their home countries on charter flights.

A passenger on the MSC Meraviglia from South Carolina told the Herald he learned of the previous passenger’s illness in a letter from the cruise operator.

“If we have it, it’s going to spread throughout the country,” he told the newspaper. “When I say there was no check, there was none whatsoever. I expected us to have some kind of a screening. They didn’t do a single thing. We walked straight off the ship.”

MSC Cruises spokesperson Alyssa Goldfarb told the Herald that the company “worked closely” with Canadian health authorities, the U.S. Centres for Disease Control and Prevention and officials from the Port of Miami, and “followed all protocols as required.”

“MSC Meraviglia received clearance after health authorities reviewed all the necessary documentation regarding the health of passengers and crew on board,” she stated.

MSC Cruises announced Friday it was suspending all U.S.-based ship operations until April 30.