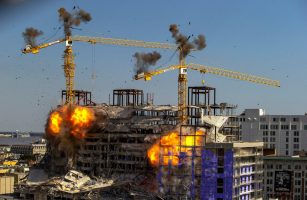 The crane demolition attempt at the collapsed Hard Rock Hotel failed on Sunday. Two construction cranes have been dangling atop the hotel even after the mishap. Authorities tried to take the cranes down through explosives but the plan didn’t materialize.

The cranes were 250 feet tall from the building’s damaged shell. Three workers were killed and over 20 people got hurt in when the upper portion of the building collapsed. However, the cranes remain unscathed but dangling dangerously on the site.

One of the cranes has broken apart and has come down in a cloud of dust while the second one teetered from the side of the 18-storey building.

While one crane is about 82-metre high, other is 91 metres high. Both of them weigh a thousand tones.

Chief of the New Orleans Fire Department, Timothy McConnell, said that city engineers would take a decision whether the remaining crane should be dismantled or not before the half-completed hotel is levelled during the demolition process.

City’s mayor, LaToya Cantrell, said that efforts were made to recover the bodies of the people who died in the collapse. He said that other victim’s body was recovered from the rubble last Sunday.

McConnell said that a sewer line got damaged when the crash crashed down but there was no damage to the gas and electric lines, he said.

The demolition drive was carried out around 2.30 pm.

The hotel was under construction since last year. The cause of the collapse has not been ascertained yet.

Earlier officials had been asking people not to come to see the explosion but throngs of onlookers came on the site, the majority of them brought earplugs and masks along with them. Some people were also removed from the nearby rooftops.

The building would be demolished as soon as the bodies are discovered.