Cruise ship tourism is likely to grow in Juneau 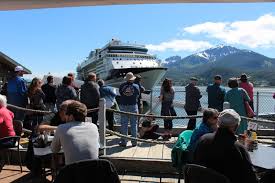 In 2020, cruise ship tourism is expected to grow again.

“It’s still a decent number, but I think we’re over that big growth spurt this year, which is good,” Day said. “Because if we got through it by handling a lot of the concerns, then we can really over the course of the winter, this organization and tour operators can fine tune some of the things we didn’t get to.”

Day stated that after his joint presentation with Travel Juneau CEO and President Liz Perry that made growth sluggish is probably the result of a combination of infrastructure limitations, market demands and the reality that 17 percent year-over-year growth can’t occur every year.

Another influx 2020, Perry said, could be tourism pledges.

Responsible tourism pledges aren’t enforceable by law, Perry said, however they do set the idea of being a careful visitor in people’s mind descending upon a destination. Iceland has such a pledge and so does the island nation Palau.

“It’s something we want to do in the fairly near future,” Perry said.

The sight into what to look for the next year was a small part of Perry and Day’s presentation, which mainly focused on Tourism Best Management Practices, which is a cooperative effort by tourism-related businesses and the City and Borough of Juneau and sets voluntary industry guidelines.