Cyclone Vayu to make landfall in Gujarat, 3 lakh people to be evacuated, heavy rainfall in Mumbai 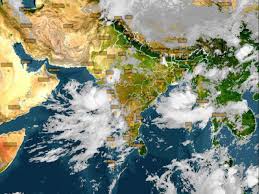 With a windspeed of around 150 kmph severe cyclonic storm Vayu will be making a landfall in Gujarat on Thursday. There are plans of evacuating around 3 lakh people and Mumbai also expects to receive heavy rainfall on Wednesday and Thursday.

The Home Ministry on Tuesday reviewed preparations as Vayu was inching closer towards the Gujarat coast and authorities have deployed NDRF personnel, rescue officials and teams of the Indian Army was put on standby.

On Wednesday morning Cyclone Vayu further moved north over east-central Arabian Sea and lay centred over the Arabian Sea. It was about 450 km west-northwest of Goa and 290 km south-southwest of Mumbai.

It is predicted that Cyclone Vayu will move further northwards and cross Gujarat coast between Porbandar and Mahuva around Veraval and Diu region. It will intensify into a severe cyclonic storm having wind speed 140-150 kmph to 165 kmph.

On June 13, the cyclonic storm is expected to hit the Gujarat coast and from Wednesday morning the evacuation will start and people will be shifted to around 700 cyclone and relief shelters.

Around 39 NDRF teams are pre-positioned by the National Disaster Response Force (NDRF) comprising 45 rescuers each in Gujarat and Diu.

The Cyclone Vayu passed parallel to the Mumbai coast on Wednesday morning however it wont have any severe effect but the city will receive heavy rainfall.

Mumbai, Konkan, Thane and Palghar will be receiving heavy rainfall, as per Mumbai IMD the cyclone is at a distance of 250 to 300 km from Mumbai coast.