Delta flier gets entire flight to himself, shares epic video of experience 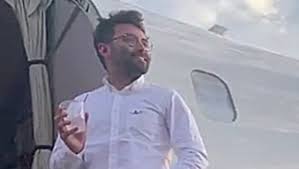 When was the last time you boarded a flight and found out that you had your whole row to yourself or the whole aircraft to yourself?

Naturally, the New York-based director, who said that his solo flight most likely resulted from a rescheduling, documented this rare experience and shared it in a video posted on social media Monday.

“That looks like an awesome experience!” the airline said in a tweet to Peone. “Thank you for the shoutout, and we truly appreciate you for choosing Delta!.”

The aircraft generally used for this route carry about 70 people, according to SeatGuru. With just the cabin crew and Peone aboard, the plane was seriously underweight. Cue the sandbags.

A cart pulled up alongside the plane, and ground crew workers loaded enough weight to allow the plane to take off.

“I arrived at the airport, which is a very tiny airport, and at the desk, they were like, ‘I don’t know if we even need to make the announcement because it’s just you,’ ” Peone told media. “I was like, ‘Oh, no. Do the announcement.’ Obviously everyone really enjoyed playing along.”

In Peone’s video, the gate agent handing the boarding announcement addresses him by name as does the flight attendant during her safety announcement.

The video shows one of the pilots joking that Peone had his “own private jet.”

Peone confirmed that he was told he could sit anywhere he liked.