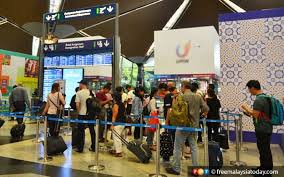 The Sabah Association of Tour and Travel Agents (Satta) and Sabah Hotel Association panic that the tourism industry of Sabah will be immensely impacted by the execution of the departure levy effective Sept. 1.

Satta President Datuk Seri Winston Liaw (pic) explained that for Sabah, the amount of departure levy to be collected may only be in tens of millions. However, its effect on the tourism of the State which generated RM8.342 billion in tourism receipts in 2018 would be greater.

He highlighted that the calculation using last year’s statistics in terms of tourist arrivals and spending in Sabah (if the departure levy is added) came up with an estimated RM24,476,824 to be collected from departing tourists.

“This is compared to the total tourism receipt (for 2018) which is RM8.342 billion, and which is expected to continue increasing this year. The amount to be collected will not be that much, but its implementation will greatly affect the whole State tourism, including the revenue to be made by this industry, of which 95 per cent of its workforce are local Sabahans.”

“We fear that if we put more pressure on the tourists (by imposing another tax) they will feel discouraged or even stop from coming to Sabah,” he informed at a press conference at his office in Api Api Centre, Tuesday. Sabah Hotel Association Honorary Advisor, Christopher Chan, was also present.

Liaw stated that they know other Asean countries are at the same time imposing departure tax, however these countries are established for long as tourist destinations and imposed their departure levy long time ago, and have long established tourism products.

“Furthermore, the current world economic and political situations like the US-China trade war and the riot in Hong Kong are affecting other countries including in this region.”

“Even the decline in China’s GDP also makes the Chinese concerned over the pricing. When the GDP comes down, it means people are not making as good money as before, so they will be price conscious,” he said.

Liaw mentioned that they supported the concerns lifted by Chief Minister Datuk Seri Mohd Shafie Apdal and State Tourism, Culture and Environment Minister Datuk Christina Liew on the implementation of the departure levy and its impact on Sabah tourism.

“We support the State Government to not wanting the departure levy implemented in Sabah and hope the Federal Government will exempt Sabah,” he said.

On July 31st, in a ministerial order gazetted by the Federal Government, Finance Minister Lim Guan Eng set out the departure levy rates depending on the destination abroad and whether the flight is economy class.