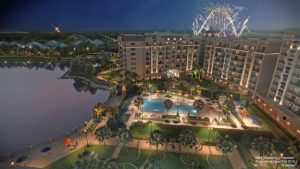 This new addition to the Disney Vacation Club portfolio and Walt Disney World Resort is inspired by Walt and Lillian Disney’s travels throughout Europe and the Mediterranean coastline – from France to Italy.

Disney storytelling and theme is inspired by European art, architecture, food and stories and Disney’s Riviera Resort welcomes guests to this experience.

Along with a mix of modern and classic furnishings, there will be a unique art collection celebrating beloved Disney characters and icons with one-of-a-kind pieces influenced by the works of master artists who also found inspiration along the European Riviera.

Guests at Disney’s Riviera Resort will also have a new way to travel to Epcot or on to Disney’s Hollywood Studios via Disney Skyliner, a state-of-the-art gondola system that will begin operating this fall. In addition to a dedicated Disney Skyliner station at Disney’s Riviera Resort, the system will conveniently connect Disney’s Hollywood Studios and Epcot to Disney’s Art of Animation Resort, Disney’s Pop Century Resort and Disney’s Caribbean Beach Resort.