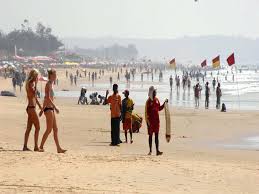 Panaji: According to the Chairman of the 15th Finance Commission N.K. Singh, slowdown in Goa’’s tourism industry is on account of the general slowdown of the economy and pressure from upcoming competitive destinations.

Addressing a press conference in Panaji Singh said Goa needed to address the issue of a huge floating population, which is putting a strain on the state”s infrastructure.

“Goa”s tourism potential is talked about greatly. But fact remains, that we have been given data that this tourist potential has gone down in the last two years,” Singh said.

“I think partly it is on account of global factors. There has been general slowdown in the economy. Also, because other competing destinations have also come up and I think it is natural that the market forces will keep taking people to more competitive destinations,” Singh said.

The Finance Commission Chief also said Goa should tap its beaches, which are already popular with tourists, for generating renewable energy like solar, wind and tidal.

The Goa government has sought in access of Rs 1,000 crore from the 15th Finance Commission, which includes a special package for those dependent on the mining industry which has come to a standstill following a Supreme Court ban in 2018.