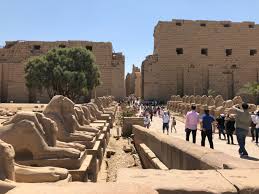 Egypt started the World Heritage Day activities last week on April 18 by announcing a newly discovered massive 3,500-year-old tomb with 18 entrance gates at the necropolis, on the west riverbank in Luxor.

The rock-cut tomb, or “saff” tomb as known in Egypt, belonged to a man called Shedsu-Djehuty, who was a prince, a mayor and a royal seal holder in ancient Egypt; he might have served under King Thutmose I, some 3,500 years ago.

Later on Thursday evening, the Ministry of Antiquities unveiled a 60-tonne, 12-metre-tall statue of ancient Egyptian King Ramses II, after its restoration and re-erection, standing next to five other statues at the pylon of Luxor Temple, on the east riverbank.

After its recent restoration, the Opet Temple has also been opened for the first time for visitors at Karnak Temple Complex on the Nile River’s east bank, in Upper Egypt’s monument-rich province of Luxor. The inauguration of the temple is also part of Egypt’s celebration of the World Heritage Day