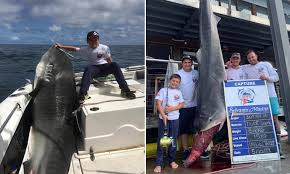 Speaking to local media, the youngest member of the Port Hacking Game Fishing Club said, the monster creature was caught with a 15-pound line.

“I was trying to hold myself by pushing off the wall in the boat,” he told Nine News, on Sunday evening.

Barley fitting onto the crews’ 7.2-metre boat, the shark was eventually able to be lifted on board after about three hours, and taken to the Sylvania Marina, where it was weighed.

“We were near a popular spot called Browns Mountain, off the continental shelf, off Sydney. That’s all I’ll say because a true fisherman never gives away his spots,” Jayden’s father told Newscorp,

The catch is yet to be officially recognised as a junior world record, with the current top spot set in 1997, standing at 312 kg.

Fishing with his father since he was just two years old, Jayden said, his new goal is to break the world record for the largest Mako shark.