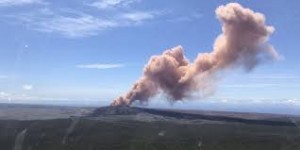 The volcanic mountain of Mount Kilauea has erupted near a residential area on Hawaii’s largest island, prompting a local state of emergency and the mandatory evacuation of 1,700 residents. The Civil Defense Agency said that extremely high levels of dangerous sulphur dioxide gas have been detected in the evacuation area.

The volcano has erupted releasing the flows of red lava into residential areas and prompting immediate and mandatory evacuations.

The residents said they saw “fountains” of lava rising up to 150 feet (45m) into the air, and images shared on social media showed a plume of red ash rising from the volcano’s Puu-Oo vent high into the sky over the state’s Big Island.

The residents in the Puna community, home to about 10,000 people, were ordered to evacuate after public works officials reported steam and lava emissions from a crack.

The scientists said areas down slope of the erupting vent were at risk of being covered by lava. Leilani Estates, home to about 1,500 people, appeared to be at greatest risk, but scientists said new vents and outbreaks could occur and it’s not possible to say where.

The volcanic eruption came after days of earthquakes rattled the area’s Puna district, including a 5.0 tremor at about 10.30 am on Thursday, the US Geological Survey (USGS).

The county, state and federal officials had been warning residents all week that they should be prepared to evacuate, as an eruption would give little warning.

Ranson Yoneda, the recreation director for the Pahoa District Park, was readying the gymnasium for evacuees after it was selected as a Red Cross evacuation center.  The Puu Oo crater floor began to collapse on Monday, triggering a series of earthquakes and pushing the lava into new underground chambers.

The collapse caused magma to push more than 10 miles (16km) down slope towards the populated southeast coastline of the island.

The Hawaii County Civil Defense Agency closed the area to visitors on Tuesday and ordered private tour companies to stop taking people into the region.