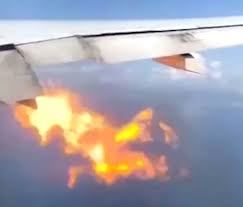 A Philippine Airlines plane had to make an emergency landing at the Los Angeles International Airport just after takeoff Thursday when flames and black smoke were seen shooting out of its right engine.

Adam Taylor boarded the plane with his wife and daughter at LAX on an international flight bound for Manila.

Taylor says he intended to film his young daughter’s reaction as the plane lifted off the ground but ended up getting video of flames shooting out of the aircraft’s engine just below the right wing.

The Federal Aviation Administration said the engine stopped working, but the plane still managed to land safely and no one was hurt.

A passenger said it was a rough landing, but he believes the pilots did their best. The FAA is still working to confirm the cause of the engine fire.