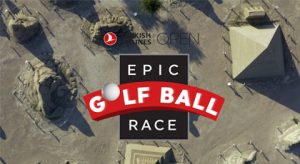 Turkish Airlines, flying to more countries than any other airline wowed golfing crowds with its Epic Golf Ball project. The sponsor of the Turkish Airlines Open golf tournament arranged a surprise for the players of the game, where golfers competed in a different type of race, with golf balls racing down a set of giant sand sculptures. Acclaimed motor racing commentator, David Croft, led the crowds on the journey of the “Epic Gold Ball Race”, keeping everyone watching in suspense.

Turkish Airlines, title sponsor of the golf tournament since 2013, aimed to create a wider awareness for golf through this fun project which blended the golf world with different interests.