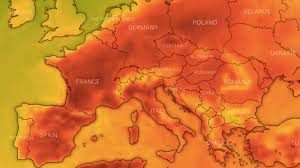 Authorities have been put on alert as temperatures threaten to surpass 40 degrees Celsius in some regions in Europe.

Meteorologists blame a blast of hot air from northern Africa for the heat this week, which has already set new records in Europe for June.

Exceptional for arriving so early in summer, the heatwave will likely send thermometers above 40 degrees Celsius in France, Spain and Greece.

The stifling heat has prompted traffic restrictions in France, sparked forest fires in Spain and fanned debate in Germany over public nudity as sweltering residents stripped off.

The worst is expected Friday when 33 of the 50 Spanish provinces face extreme temperatures, which could reach 44 degrees in Girona.

In France, temperatures “unprecedented” for their timing and intensity — since 1947 when detailed surveys started — were expected to reach at least 39 degrees over two-thirds of the country, said weather service Meteo-France.

Health official Jerome Saloman said the impact of the extreme heat was starting to be felt in France, with an increase in weather-related calls to emergency medical services.

Some schools were closed Thursday and Friday, while several cities — including Paris and Lyon — restricted traffic to limit a build-up of air pollution.

The 70-year-old record for the highest temperature recorded for June was beaten in Germany as 38.6 degrees Celsius was recorded in Brandenburg, the German Weather Service (DWD) said.