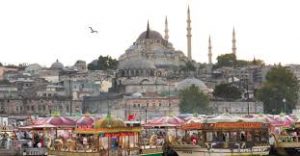 An 801-kilometer route from Istanbul to Konya takes international travelers from the tomb of a well admired Islamic figure in Istanbul to the tomb of Mevlana Celaleddin Rumi, a famous Sufi mystic. Along the way in “Sufi Trail,” travelers find out Anatolia and shrines, tombs of other holy Sufi figures.

The “Sufi Trail,” a hiking and biking trail, is the brainchild of Sedat Çakır, a Netherlands-based, a writer and activist with Turkish origins, and Iris Bezuijen. It was set up in 2014 by the two to revamp the locations where famous mystics, poets and scholars of Turkey had lived once and created awareness to culture and faith tourism in Turkey.

Either on the bike or on foot, participants set out the journey from Eyüp Sultan Tomb in Istanbul. Eyüp Sultan, whose name was given to the Istanbul district where his tomb is found, is a companion of Prophet Muhammad. He was a well-known warrior in the Muslim campaign to defeat Constantinople and died in 672.

In the city he was buried. However the location of his tomb was not discovered for centuries. It was only after the Ottoman conquest of the city that his burial site came into the limelight and a tomb was constructed, side by side with a mosque. Since then, his tomb has become a holy site and a place where the Ottoman troops would visit before campaigns. Today, it still attracts a large number of visitors every day.