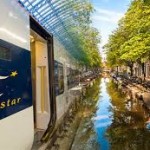 The maiden voyage of the first passengers on the new Eurostar services started at 8:31 am  from London to Amsterdam, it left from St.Pancras and will reach Amsterdam in three hours and 41 minutes.

There will be two services in a day one in the morning and one in the evening.

On the way through it calls at Brussels and Rotterdam but chances are that the direct services will take place in the future resulting in shorter travel time.

The low cost airlines will run out of business although the flight rates are cheaper and consumes less time, however getting on the train is much preferred than flyin.

Nicolas Petrovic, chief executive of Eurostar, stated during the announcement of the route that the launch of  service to the Netherlands represents an exciting advance in cross-Channel travel and heralds a new era in international high-speed rail.

The links between the UK and three of Europe’s top trading nations will be transformed with direct services from the UK to the Netherlands, France and Belgium.

It will mark the culmination of investment in high-speed rail on both sides of the Channel.

Eurostar mentioned that the launch of the London to Amsterdam service marks a historic milestone in the expansion of international high-speed rail travel.

It is bound to  revolutionize  the connection between  important destinations.

Issues like agreement between the UK and Netherlands governments about passport checks at the various borders that the train must pass through needs to be ironed out.