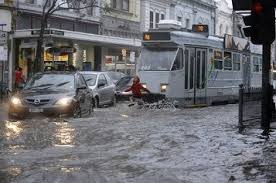 Thousands of Victorians were left power after a slow-moving storm caused flash flooding in Melbourne, with half of the city’s November rainfall arriving in just three hours.

Half of the city’s November rainfall arrived in just three hours, since 9am more than 30 mm of rain has fallen on the Melbourne Cup Day soaking racegoers at Flemington.

At the tunnel entrance onto the CityLink along the Kingsway, parts of Southbank, , Rowville, Balwyn North, Windsor, Hawthorn, Ashburton and Narre Warren flooding has led to severe chaos.

Through the floodwater cars got submerged and motorists were forced to push their cars, there were more than 400 calls for help in the past 24 hours to SES for flood related emergencies.

Before 12pm Olympic Park received 35mm of rain and Melbourne airport got 34.6 mm of rain.

Weatherzone meteorologist Joel Pippard said that it is a very slow moving system and a big long line of heavy rain.

Services to Flemington Racecourse was temporarily halted as flash flooding caused chaos while crews were urgently sent in to clear the water before the race finished this afternoon.

Due to unsafe landing condition flights from Melbourne Airport were diverted.

It was confirmed by Weatherzone that this was the second wettest Melbourne Cup day on record. In 1942 there was 46.5 mm of rain recorded from 9 am on the Cup Day.

The inclement weather led to flight diversion of Singapore Airlines flight SQ227 departing from Singapore  was diverted to Sydney. The flight was schedules to Land in Melbourne at 8:15 am.

As confirmed by a Qantas spokesperson flight QF80 from Tokyo was forced to stop in Sydney en-route to Melbourne to refuel in the event of poor weather conditions in Melbourne.

This morning Airservices Australia  tweeted that poor weather may cause some delays this afternoon.

It is expected that the weather might improve later in the day and the passengers were advised to check with the airlines for details.