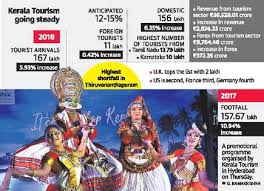 Foreign tourist arrivals (FTAs) to India went up despite travel advisories issued by several countries and attempts by some groups to paint a negative picture about the situation in the country, said Union Tourism Minister Prahlad Patel on Friday.
Till December 2019, there has been a 43-per cent increase in tourists availing e-visa, Forex has grown by almost 19 per cent and the increase in FTAs is around 8 per cent as compared to the same period in 2018

“I think the data makes clear to thos those trying to create a bad perception of the country in a planned manner that they have failed in comparison to the attempts made by the prime minister to showcase this country. The data shows India is stable, peaceful and definitely worth seeing,” said Patel when asked about the effects the protests against CAA, NRC, NPR have on the tourism industry.

According to data from the ministry, FTAs grew by 4.3 per cent in September 2019, a month after the abrogation of Article 370 in Jammy and Kashmir, as compared to the same period in 2018. Similarly, Forex grew by 11 percent during the same period.