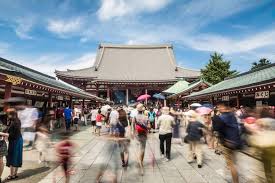 Foreign visitors and tourism workers in Tokyo’s historical Asakusa district said that they have faced trouble regarding reservation made online.

A couple said that when they arrived at their designated facility, the staff over there told them that they could not confirm their reservation. The couple demanded an explanation, but could not communicate well with the employees.

Thereafter the staff promised an arrangement for them, but nothing was done. The couple said that they had to look for another facility on their own and felt that it was a bitter experience.

Tourism workers also said that they sometimes have trouble dealing with foreign visitors.

Rickshaw services in Asakusa guide passengers around tourist spots along courses of their preference within a predetermined time. But sometimes, foreign visitors ask the pullers to stop so that they can walk around places of interest. The pullers added that they have a hard time providing sufficient explanation to foreign travelers.