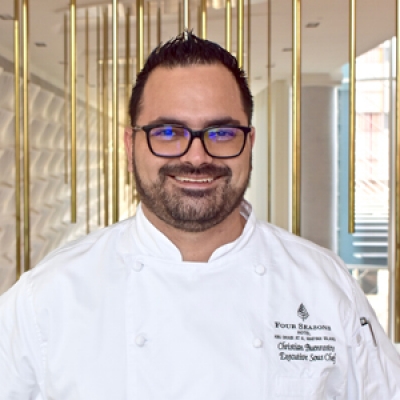 Four Seasons Hotel Abu Dhabi, a five-star luxury hotel tucked into the modern landscape of Al Maryah Island, announces a unique culinary offering in its lobby lounge Al Meylas, often referred to as “the living room of Abu Dhabi.” Crafted by celebrated Executive Sous Chef Christian Buenrostro, the new raw vegan menu items are inspired by a commitment to fresh, local ingredients and a desire to cater to an array of healthy lifestyles. The Forbes Five Star hotel is elevating its vegan dining with the addition of nine innovative, raw vegan dishes including starters, main courses and desserts.

“Through our newly-introduced raw vegan dishes, we are setting a new standard in healthy hotel dining with elevated vegan offerings in our popular Al Meylas lounge,” says Chef Christian Buenrostro. “Working alongside our team of culinary experts, we have created raw vegan lunch and dinner items that are both nourishing and delicious, infused with flavours and ingredients authentic to the diverse cuisine of the Emirate of Abu Dhabi.”

According to the kitchen rules of raw cooking, the food is heated or “cooked” at temperatures not greater than 115 to 118 Fahrenheit (47 Celsius) to preserve nutrients and enzymes, diminish the energy used for cooking, and keep food in its most natural form.

Based on fresh fruits, vegetables, nuts, seeds and sprouted/soaked grains and legumes, the health-inspired raw vegan dishes created by Chef Christian are available at the Hotel’s signature lobby lounge Al Meylas during lunch and dinner time, and through in-room dining around the clock.