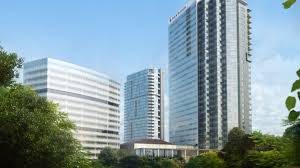 Four Seasons Hotel Bengaluru at Embassy ONE will begin accepting reservations May 1, 2019.

The Four Seasons will operate the 230-room hotel, as well as 105 Four Seasons Private Residences and commercial space within the new Embassy ONE development. Four Seasons Hotel Bengaluru is located in the city’s northern corridor, close to Kempegowda International Airport, key business districts and landmarks such as Bangalore Palace and Cubbon Park. It will be the second Four Seasons in India, joining sister property Four Seasons Hotel Mumbai, just two hours away by air.

Of the 230 rooms, spread across 30 floors, 39 will be suites. The interior will have a contemporary design with distinct spaces for working, relaxing and sleeping. Four Seasons touts that all rooms will have spa-like bathrooms. The outdoor pool in the landscaped private gardens will lend a resort-like feel to the property and will lead guests to the Infuse Spa. At the spa, there will be 11 treatment rooms and signature treatments include the Coffee Scrub, Flower at Four Seasons, One a Chocolate Spice Trail and the Candle Massage.

The Executive chef Stéphane Calvet will lead the six dining venues, which includes: Far & East, an Asian brasserie; Copitas, a 21st-floor terrace serving local cocktails; CUR8, an all-day dining restaurant; The Lounge & Terrace, serving afternoon tea, coffee and light bits; the Pool Bar, with tropical drinks and “refreshing bites;” and The Collection, a bar with a curated selection of whiskies.