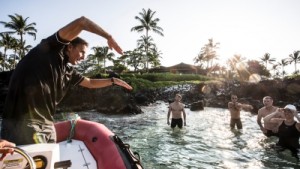 Four Seasons Resort Hualalai has had a four year partnership with Dave Scott, who regularly hosts his signature Triathlon Training Experiences at the Resort four times each year. Scott is a legend in the sport of triathlon, and was the first person to be inducted into the Triathlon Hall of Fame. Known simply as “The Man,” Scott is recognised as one of the greatest triathletes of all time.

“Kona will always be an extraordinarily special place for me. It will always be an integral part of the sport I have loved and participated in for nearly my whole adult life. It is a place where I have come to train, compete and now coach triathletes. Four Seasons Resort Hualalai provides me with a beautiful backdrop to host our Triathlon Training Experiences, and also this special annual Evening of Champions event during the week of the IRONMAN World Championships,” states Scott.

The third annual Evening of Champions event will be held at Four Seasons Resort Hualalai on Thursday, October 11, 2018 from 5:30 to 8:30 pm and will be available to Resort guests and triathlon enthusiasts alike. Scott will welcome special guests Craig Alexander, three-time IRONMAN World Champion and Bob Babbitt, acclaimed triathlon sports reporter and Triathlon Hall of Fame inductee.

Extensive luau buffet featuring Hawaiian favourites like kalua pig, poke, and more
In addition to curating this annual evening at the Resort, Dave Scott announced he will continue his successful Triathlon Training Experience at Four Seasons Resort Hualalai for the fourth year in a row. Dates for this intimate and results-driven experience are January 21-25, May 6-10, June 17-21, and July 29 – August 2, 2019.