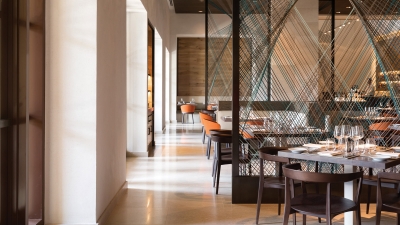 Four Seasons Resort Orlando at Walt Disney World Resort will host an incredible “Friends of James Beard” dinner benefiting the renowned James Beard Foundation for the fifth year in a row. The event will take place on December 6, 2019 at Ravello, the Resort’s modern-Italian restaurant, and will feature Mediterranean-inspired courses by seven talented culinarians.

The Resort’s Executive Chef Fabrizio Schenardi and Executive Pastry Chef Rabii Saber, a 2019 James Beard Award semi-finalist in the Outstanding Pastry Chef category, will host the dinner along with guest chefs who are either nominees or winners of a James Beard Award.  Guests will surely be delighted by this indulgent six-course dinner with wine pairings, experienced in the lively open kitchen atmosphere of Ravello. Tickets for the scrumptious affair are USD 250 per person and must be purchased in advance online.

The menu for the event includes:

The annual dinner, which is always a sell-out, is a not-to-be-missed experience.

Orlando was named People magazine’s “Foodiest City” in 2015, and it’s no secret that Four Seasons Resort Orlando has added to the city’s appeal to foodies since its 2014 opening. The diverse restaurant concepts and amazing culinary team at Four Seasons Resort Orlando have helped set the stage for gourmet dining in Central Florida.  Constantly innovating and striving to offer new products, presentations and extraordinary flavours, a meal at one of the Resort’s unique restaurant concepts is always an experience to remember.  The Resort has been host to a James Beard Foundation dinner annually, however a true highlight was the team’s invitation to cook at the James Beard House in New York in November 2016. Chef Schenardi and team have since cooked at many invitation-only events, such as the Epcot International Food and Wine Festival, and the Pebble Beach Food and Wine Festival. In addition to his James Beard Award semi-finalist recognition, Chef Saber was also a member of the 2017 American team for the Coupe de Monde de la Patisserie in Lyon, France, an event known in the culinary world as the “Pastry Olympics.”