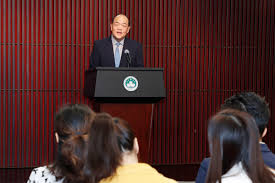 The gaming and tourism industries of Macau and its future looks quite secure under the protection of the new Chief Executive, Ho lat Seng.

While attending a media conference in Beijing, he said that one country, two systems principle and national security law is playing a crucial role behind the stability of the city. This is important for the region’s future prosperity.

Ho maintains that one can clearly notice that Macau has been doing pretty good over the last 20 years in the one country aspect, including the enactment of national security law. With such legislation, it can stop foreign interference.

He further adds that Macau cannot become a chaotic tourism city. Its major revenue comes from tourism and gaming.

The six gaming concessions and sub-concessions of Macau will expire 2022. Plans for re-tendering are in play, Ho explained that a draft has already been developed to be refined and amended once his new administration takes over in December.