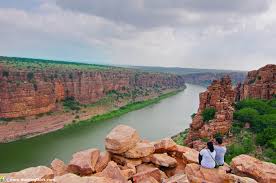 Andhra Pradesh Tourism Minister Avanti Srinivas said that the Kadapa district is being developed in a way so that it can find a place in the international tourism map. As part of the Gandikota festivities, the state tourism minister, district in-charge minister Adhimulapu Suresh, along with other dignitaries inaugurated the event by lighting the lamp in Gandikota.

Speaking at the event, Tourism Minister Avanti Srinivas said that Gandikota is the most popular place in Andhra Pradesh and India too. The minister said that steps are being taken to build the five-star resort in Gandikota as directed by Chief Minister Jagan Mohan Reddy.

Construction of a rope-way at Gandikota is also being thought of to make the district an international tourist hub in the coming days.