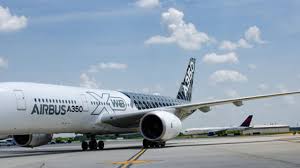 The German government has placed a firm order for three ACJ350-900 XWBs, becoming the first government customer for the type, which has already been ordered by private customers.

The aircraft are destined for a mix of government, troop transport and medical evacuation roles. Delivery of the first aircraft is planned for 2020, and the other two in 2022.

Cabin outfitting will be facilitated by ACJ’s Easyfit cabin-outfitting concept, which features pre-installed attachments and standardized interfaces that greatly simplify installing walls and furniture in a carbonfibre fuselage.

“The ACJ350 XWB is the ultimate in modern, long-haul, private jet travel, with the capability to deliver large groups nonstop to the world in unmatched comfort, efficiency and reliability,” says ACJ President Benoit Defforge.

The A350 XWB is the first Airbus aircraft to feature a carbonfibre fuselage and wings, which are immune to fatigue and corrosion, as well as saving weight.

Its technological features also include the greater comfort of a lower cabin-altitude, simpler and faster transition-training for pilots through the newest version of Airbus’s common cockpit, and aerodynamically efficient wings that adapt their shape in flight.

Total A350 XWB orders stand at around 900, more than 250 of which are already in airline service.

Around 200 Airbus corporate jets are in service worldwide, flying on every continent, including Antarctica.