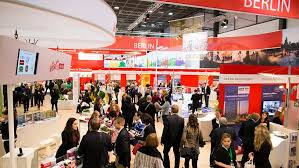 With a five per cent increase in business volume at ITB Berlin 2018 compared to last year, and excellent business being forecast for the coming months, the international travel industry is well on course for a record year.

As ITB Berlin concluded, the global travel industry presented itself in good health and in an optimistic mood, more so than for a long time. The results of the five-day exhibition on the Berlin Exhibition Grounds mirrored the good atmosphere. The show, which had been booked to near capacity for months, impressively confirmed its role as a reliable economic indicator and forward-looking trendsetter.

With around 110,000 trade visitors from Germany and abroad, ITB Berlin was able to reaffirm its standing as the World’s Leading Travel Trade Show. Despite the warm spring weather around 60,000 members of the general public flocked to the display halls on the weekend to find out about the wide range of information available from exhibitors. The ITB Berlin Convention, which examined current issues such as overtourism and digitalisation, also underlined its role as the global travel industry’s leading think tank.

The main reason for the industry’s positive mood is the positive economic climate in the eurozone which according to leading economic institutes is better than at any time since the turn of the millennium. Dr. Christian Göke, CEO of Messe Berlin GmbH: “The consistent forecasts of sustained global economic growth for the next two years decisively contributed to the positive mood among exhibitors and visitors these past few days. Against the backdrop of a booming economy, record low employment and good wage settlements, more and more consumers are willing to spend money. Furthermore, because of the strong euro and correspondingly weak dollar holidaying in numerous countries outside the eurozone is becoming noticeably cheaper.

Dr. Christian Göke continued: ”The extremely positive economic trend in the travel industry should not blind us to the fact that the industry faces great challenges around the world. The digital transformation of an entire industry continues to move forward apace and affects every company and provider, regardless. On the other hand, issues such as the need for greater security on one’s travels, the increasingly important and controversial phenomenon of overtourism, and the globally changing face of travel brought about by companies such as Airbnb are decisively influencing the social discourse on the future of tourism. This year, ITB Berlin again presented itself as a platform that without exception debated all the important trends and the current issues in accordance with the industry’s future needs.“

From 7 to 11 March 2018, over a period of five days, more than 10,000 companies and organisations from 186 countries and regions exhibited their products to visitors in 26 halls on the Berlin Exhibition Grounds. Once again, there was a high percentage of buyers in a decision-making capacity: two-thirds of trade visitors said they were directly authorised to make buying decisions for travel products. Around 74 per cent of the ITB Buyers Circle attended in a decision-making capacity, with budgets that exceeded one million euros. More than one-third of the buyers present even had ten million euros and more at their disposal.