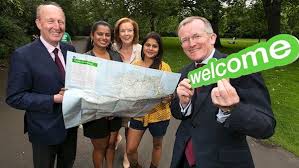 The Government has introduced a €12 million campaign. It would be the largest campaign of this type ever carried on by Tourism Ireland. The campaign was targeted at boosting the Irish industry over the course of the next three months.

In the middle of the expected disorder of whatever form Brexit takes the tourism industry is proving quite susceptible even before Britain actually goes out of the EU.

With sterling in freefall in recent times, Ireland has turned out to be a less attractive destination for British travelers as well as a direct competitor with the British industry, where the depreciated currency has rendered Britain a more affordable option for holidaymakers.

According to the Department of Transport, Tourism, and Sport, the new campaign will “incorporate a major focus on attracting visitors to more rural areas and our less visited attractions and locations”. In reality, that will witness significant media campaigns conducted across the airwaves and social media, particularly in the US and Britain – two of Ireland’s largest catchment areas for tourist business.

Also, the campaign will see its message ramped up by all the prime transport carriers, like Aer Lingus, Ryanair, and Stena Lines, while the impending Rugby World Cup in Japan will witness Ireland endorsed as a holiday destination with Japanese tour operators at two events there in advance of Ireland’s first match on September 28.

Tourism Minister Shane Ross was quite “delighted” while launching the campaign, one which he said will make sure the industry “continues to grow in a manner that is sustainable, from an environmental, economic and social perspective”.

“It is essential that we continue to promote and expand our tourism offering around the world in the face of challenges such as Brexit,” Mr Ross said.

Tags: Government is all set to attract more visitors