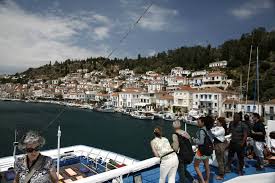 Greek ports are hoped to pull more cruise tourists after the rise of 15 percent of cruise liner calls as well as passenger arrivals last year, officials have told Xinhua.

In 2019, the number of cruise passengers traveling from the ports of Greece has grown by 15.64 percent to more than 5.53 million, and that of cruise ship arrivals have increased by 14.34 percent to 3,899, the Hellenic Ports Association, a non-profit organization for Greece’s port operation, said Tuesday.

Piraeus, the biggest port in Greece, tops the chart in terms of destination for cruises in Greece for the 10th year consecutively, with 622 cruise liners visiting it or leaving it last year, in comparison to 524 the year before.

The Piraeus Port Authority, a subsidiary of China’s COSCO SHIPPING Group, hopes that in 2020, a further increase will happen, according to Deputy Manager for Public and Investor Relations Nektarios Demenopoulos.

After a “very satisfactory growth” in 2019, figures are predicted to increase higher in the next years, he said.

Heraklio, the largest city on the island of Crete, also anticipates that cruise tourism will grow up in the forthcoming years. In 2019, it reached its highest figures in a decade, with 204 cruise liners bringing 307,043 passengers.