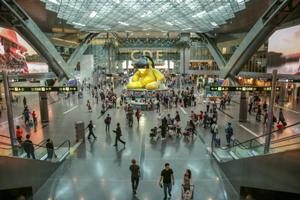 Hamad International Airport (HIA) is set to participate in the prestigious annual Skytrax World Airport Awards ceremony taking place in Paris on the 2nd April 2020 for which HIA is a candidate for the ‘World’s Best Airport 2020’. The Skytrax World Airport Awards is the most respected accolade for the airport industry, voted by passengers in the largest annual global airport customer satisfaction survey. The awards ceremony will take place at the Passenger Terminal Expo 2020 (PTE), the world’s leading international airport conference and exhibition.

HIA’s participation at the Skytrax World Airport Awards, which has seen the airport move up the ranks over the years, having moved from the fifth position in 2018 to its current position as the fourth best airport in the world.  This accomplishment has been instrumental in recognising HIA as the gateway to Qatar and the world, putting Qatar on the map as a destination of choice for passengers. HIA’s success at the Skytrax World Airport Awards is also important in setting HIA apart from other airports and in giving a lasting impression of Qatar’s modern, smart and quality standard of living while celebrating Qatar’s heritage and culture.

Commenting on HIA’s participation at the Skytrax World Airport Awards 2020, Engr. Badr Mohammed Al Meer, Chief Operating Officer at Hamad International Airport, stated: “It is Our goal to redefine the airport experience by empowering passengers and taking the stress out of travel while keeping their passion for exploration alive. We strive to enrich global travellers experience by offering them a multi-dimensional lifestyle experience featuring a world-class art collection, endless shopping and dining, entertainment and relaxation facilities all housed in one expansive terminal. Skytrax is a platform that allows our passengers to share their view on their experiences with us as we move closer to the top three rankings for the ‘World’s Best Airport’ at The Skytrax World Airport Awards 2020.”

HIA is increasingly being recognized for its 5-star passenger experience and operational excellence. With passengers at the heart of the airport strategy, HIA unlocks the power of technology to deliver the airport of the future. By employing cutting edge smart technologies, automation and self-service, HIA provides a hassle-free experience for passengers fuelled with choice and flexibility.

The successful completion of the first major phase of HIA’s Smart Airport programme has seen up to 40% of the home carrier Qatar Airways’ passengers preferring to self-check-in; and a further 20% opting for self-bag-drop. The trail for the second phase of the Smart Airport Programme, which was recently completed in August 2019, aims to combine passengers’ flight, passport, and facial biometric information in a single electronic record at the self-check-in kiosk or mobile app. This phase further sets to empower passengers and provide them with a swift and seamless experience using facial verification at various touchpoints including self-service bag-drop, automated security gate, and the automated boarding gate.

HIA is also undertaking its expansion plans to meet the growing demand for air travel and enhance its position as the preferred gateway for travel. The expansion will increase HIA’s capacity to more than 53 million passengers and 3 million tonnes of cargo annually by 2022. In addition to the immediate benefits of increased space and capacity, the construction of the Airport City will also provide significant future investment opportunities including a free trade zone, office and business complex, and hotels.

HIA’s drive to deliver excellence in operations, facilities and passenger experience has been recognized time and again. In 2019, Skytrax acknowledged HIA’s efforts in providing best-in-class services, presenting the airport with numerous awards and achievements including its award as the 4th Best Airport in the World. HIA also renewed its 5-star airport status and was awarded as the ‘Best Airport in the Middle East’ title for the fifth year in a row and ‘Best Staff Service in the Middle East’ for the fourth year in a row.  HIA was also recognised in 2018 as the ‘Best Airport’ in its ability to accommodate 30-40 million passengers annually and awarded Second-Best International Airport in the World by the Travel + Leisure World’s Best Awards 2019. The young and ambitious airport was awarded “Best Airport for Passenger Experience” for the second consecutive year in a study by AirHelp 2019.

The Skytrax World Airport Awards are based on customer nominations across 100 nationalities of air travellers and include 550 airports worldwide. The survey evaluates customer satisfaction across 39 key performance indicators for airport service and product – from check-in, arrivals, transfers, shopping, security and immigration, through to departure at the gate.