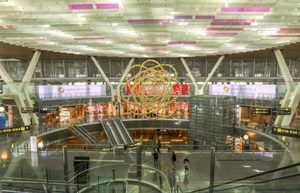 Hamad International Airport (HIA), Qatar’s five-star gateway to the world, will reveal its exciting plans for the second phase of the airport expansion to an international audience of real estate developers and investors at Cityscape Qatar, which takes place from 22 to 24 October at Doha Exhibition and Convention Centre.

At HIA’s exhibition booth at Cityscape Qatar, attendees will experience the awe-inspiring look and feel of the expanded airport building which will set a new standard in the traveller experience globally. The incredible new plans will propel Hamad International Airport to become a destination in its own right once complete.

3D mockup designs of the much-anticipated expansion will be on display and the unique features of the plans will be available to visitors over the course of the exhibition. Once complete, the airport’s capacity will increase to accommodate more than 53 million passengers annually by 2022, an increase of almost 30% from its current passenger footfall.

Qatar Airways Group Chief Executive, His Excellency Mr. Akbar Al Baker, said: “The expansion of Hamad International Airport is a vital part of the continued success of the Qatar Airways Group, especially in the run-up to the 2022 FIFA World Cup as we prepare to welcome millions of football fans to Qatar.

“Expansion is also a sign that Qatar’s economy is going from strength to strength, as well as a factor that will support future growth. I am confident that Hamad International Airport will continue to attract investment into the country as we launch its second development phase.”

Engr. Badr Mohammed Al Meer, Chief Operating Officer at Hamad International Airport, said: “The second phase of our expansion is a testament to HIA’s growth in its relatively short time of operations.  With the third quarter of this year being the busiest on record for the airport, HIA continues to grow and remain a preferred hub for travellers. Cityscape Qatar is the perfect platform for us to reveal our exciting plans, and we look forward to showcase what the expansion project has to offer.”

The airport will also see the construction of an Airport City, which will provide significant future investment opportunities, including a free trade zone, an office and business complex, landscape area and hotels among others. HIA will also see the construction of a new cargo terminal which will increase the capacity handled to 3 million tonnes per year and will help accommodate the expected surge in freight traffic. Expansion construction is set to commence in the first quarter of 2020, all contracts are to be awarded by the end of this year.

Cityscape Qatar showcases the most elite real estate developments in Qatar to an international audience of investors and other industry professionals. Aligned with the Qatar National Vision 2030, the exhibition aims to foster partnerships and create opportunities that drive development and investment in the country.